2ND EDITION OF THE VANCOUVER INTERNATIONAL BLACK FILM FESTIVAL IS BACK ON DECEMBER 16 – 20, 2022 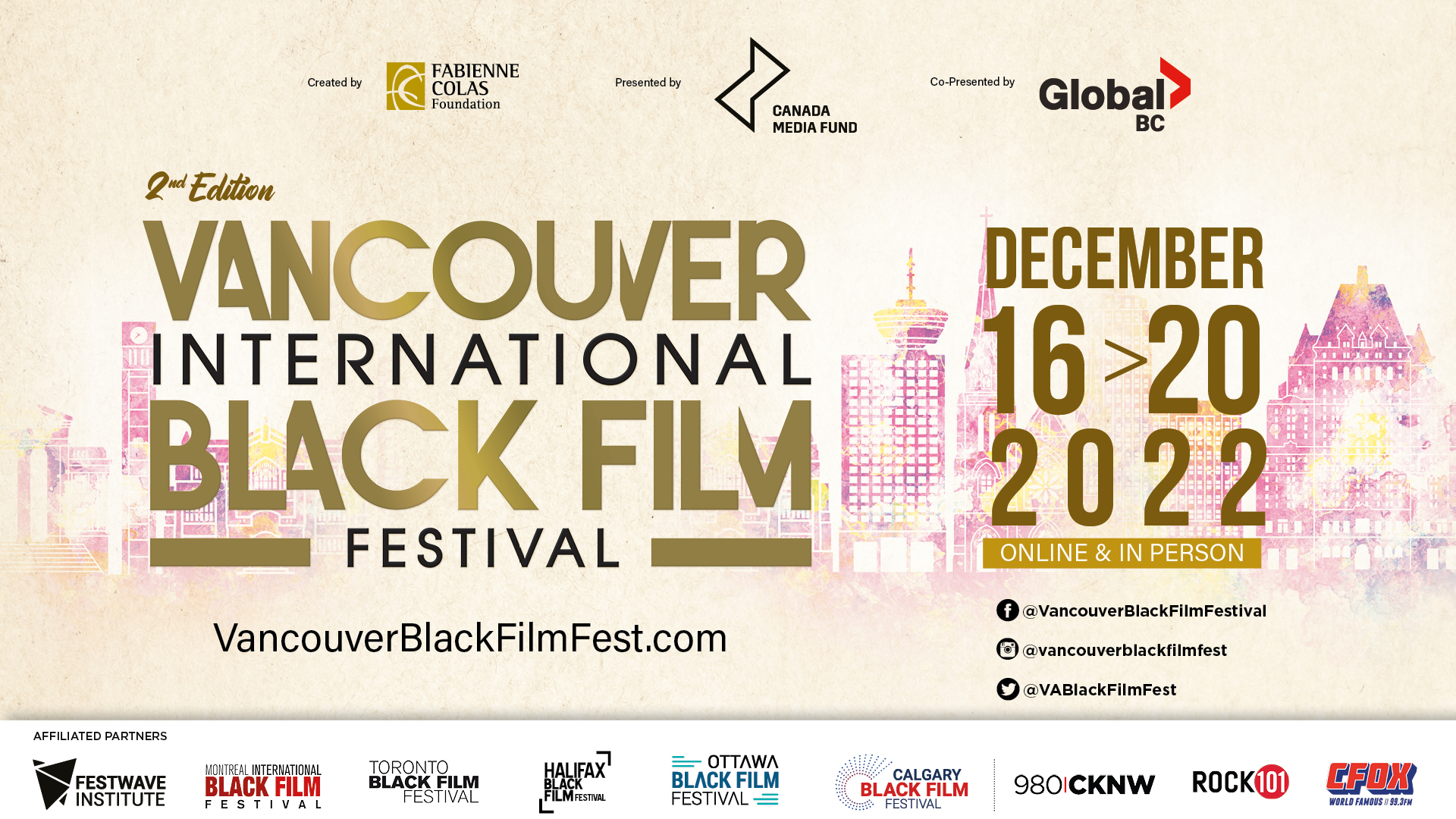 All Access Passes and Single Tickets are on Sale Now at VancouverBlackFilmFest.com

Vancouver, B.C.— After a successful first virtual edition, #VIBFF22 is back with a hybrid version (in-person and online) to amplify the voices of Afro-descendants in British Columbia. The second annual VIBFF, created by the Fabienne Colas Foundation, co-presented by Canada Media Fund and Global BC, is thrilled to announce its official hybrid program and events lineup, running December 16 – 20, 2022. The In-Person screenings and events will take place at the VIFF Vancity Theatre and Studio Theatre.

The Vancouver International Black Film Festival’s exciting and diverse programming is moving to a hybrid model this year with its first In-Person offering in Vancouver, with continued Online programming for accessibility across Canada and the world. Through films and various panels, this hybrid second edition is aimed at the public from all communities as it highlights the talent of creators from diverse backgrounds and makes room for them to reflect on the issues they face.

VIBFF is a unique festival, coupled with entertainment and empowerment. It not only shines a light on diversity, but through film screenings and various discussion panels, this festival is an impactful movement that gives a voice and a platform to marginalized artists.

“What a thrill to be back in the Hollywood of the North with the 2nd annual Vancouver Intl Black Film Festival! It’s a true privilege to be able to showcase exceptional work and authentic Black stories that do not always make it to the silver screen. We invite everyone to join us in spreading diversity off and on camera from coast to coast in order to celebrate the differences that make us unique and the shared values that bring us together.” – Stated Fabienne Colas, President and Founder of the Black Film Festivals in Montreal, Toronto, Halifax, Ottawa, Calgary, and Vancouver. “At the Fabienne Colas Foundation, we’re proud to continue to bring our unparalleled expertise, our strong eco-system and network, and our savoir-faire along with our 18 years of experience to Vancouver, a beautiful city that is waiting to implement inclusion, diversity and change in the film industry.”

The opening night is a red carpet event happening on Friday, December 16 at 7 p.m. PST and opens with Jennifer Njeri Gatero’s NAIROBBY at the Vancity Theatre. A suspenseful film about friendship and loyalty as six university students who have just pulled off a daring heist are put to the test. At 9 p.m. PST, all films will be accessible online.

Nathan Rice’s THE ROAD LESS CYCLED, #VIBFF22’s closing film, will be available online throughout the Festival. In the beautiful KwaZulu-Natal midlands of South Africa, a young aspiring cyclist desperate to make something of himself steals his soon-to-be stepfather’s bicycle and embarks on a 300km journey to what could be a career-making bicycle race.

This second edition highlights the Fabienne Colas Foundation’s award-winning BEING BLACK IN CANADA short film series; the VIBFF Black Market, where film & television industry professionals will share their thoughts and real-world experience on today’s most critical filmmaking issues; as well as special in-person screenings of: AMERICAN GIRL, COLOR BLIND and NOBODY WAS HERE.

“As part of our mandate to enable more voices and bring more visibility to underrepresented creators, the Canada Media Fund is proud to support the second annual Vancouver International Black Film Festival,” said Tamara Dawit, VP of Growth & Inclusion, CMF. “We are excited to work alongside the Fabienne Colas Foundation as they continue their groundbreaking work to amplify Black voices, stories, and perspectives and empower Black creators.”

“We are thrilled to once again support the Vancouver International Black Film Festival after a successful inaugural event a year ago. It’s important to amplify voices and stories that have traditionally had limited space and attention.” – Bhupinder S. Hundal, Global BC News Director & Station Manager

Presented by NETFLIX, in collaboration with the National Bank, and supported by Telefilm Canada, the Canada Council for the Arts and various partners. Online presentation.

Canadian short films from the 35 filmmakers of the 2021 cohort will be presented Online at #VIBFF22. The FCF’s Being Black in Canada supported 35 Black Canadian Filmmakers, 18 to 30 years old, in Montreal, Toronto, Halifax, Ottawa, Calgary, and Vancouver in the creation of their first documentary short films (8 to 10 minutes). The filmmakers received professional coaching for each stage of the audiovisual production process and then made a short documentary film under the tutelage of industry professionals. A unique project that ensures inspiring emerging artists from culturally diverse backgrounds.

The VIBFF Black Market– space is dedicated to the cinema industry and to raising awareness of today’s social climate with powerful & FREE panel discussions.

The Vancouver International Black Film Festival (VIBFF), a not-for-profit organization created by the Fabienne Colas Foundation, is about discovery and Inclusion. VIBFF aims to amplify more Black voices and showcase the most relevant Black films from here and abroad while creating a space to debate major cultural, social, and socio-economic issues. VIBFF is dedicated to giving unique voices in cinema the opportunity to present audiences with new ways of looking at the world. VIBFF’s ambition is to encourage the development of the independent film industry and to promote more films on the reality of Black people from around the globe.

About the Fabienne Colas Foundation

The Fabienne Colas Foundation (FCF) is Canada’s largest Black cultural organization. Created in 2005, the FCF is a not-for-profit arts organization dedicated to promoting Diversity and Inclusion in Cinema, Art and Culture in Canada and abroad. Along with Zaza production, the Fabienne Colas Foundation is also the creator of 12 Festivals, including the highly successful Montreal Black Film Festival, the hugely popular Toronto Black Film Festival, the Halifax Black Film Festival as well as several other successful Festivals in Canada, the USA, Haiti and Brazil. These initiatives/festivals have showcased and supported over 5,000 artists and attracted over 2 million festival-goers. The Foundation is also the creator of the FCF’s Being Black in Canada program, Canada’s largest incubator dedicated to Black Filmmakers and Festwave Institute, created to empower the next generation of Black & underrepresented film & TV professionals.