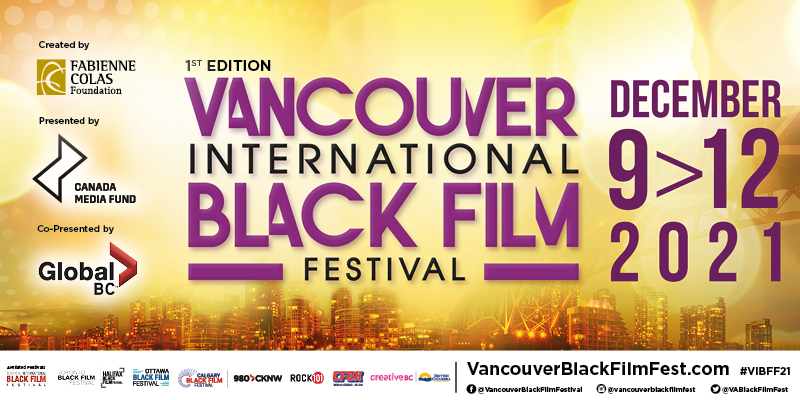 #VIBFF21 Opens with Erika Cohn’s BELLY OF THE BEAST

Amplifying Black voices through a bold and innovative ONLINE programming that challenges conventions and leaves a distinctive mark on our times.

Vancouver, November 23, 2021 – After 17 years of massive success in Montreal, Toronto, Halifax, Calgary and Ottawa, the Fabienne Colas Foundation’s (FCF) National Black Film Festival movement is expanding to the Hollywood of the North!

The inaugural Vancouver International Black Film Festival, created by the Fabienne Colas Foundation and co-presented by Canada Media Fund and Global BC, is thrilled to announce its official programming running entirely Online, December 9 – 12, 2021. Through films and impactful panels, this first edition promises to unite us all to celebrate Black artists who otherwise would remain invisible.

“We are so proud to bring our unparalleled expertise, our strong eco-system and network, and our savoir-faire along with our 17 years of experience to a city that is waiting to implement inclusion, diversity and change. We are exactly where we need to be at this moment!” Stated Fabienne Colas, President and Founder of the Black Film Festivals in Montreal, Toronto, Halifax, Ottawa, Calgary, and Vancouver. “Mainstream Canada needs to see more Black films. We urgently need more Black film professionals working within the Canadian Film Industry. Nowhere is this more essential than in Vancouver where the film industry is open to changing diversity. The VIBFF is an integral part of a societal movement and the VIBFF is the springboard for change.”

The VIBFF will open on Thursday, December 9 at 6PM PST, Online, with Erika Cohn’s BELLY OF THE BEAST. This documentary feature tells the story of Central California Women’s Facility, the world’s largest women’s prison, which helped conceal the reproductive and human rights violations transpiring inside its walls.

#VIBFF21 will close with Ignacio Márquez’s feature film THE SPECIAL. This narrative feature is about a profoundly charming young man who must navigate the challenges of early adulthood with Down Syndrome as he seeks to build a life of independence from his troubled father.

Highlights of the festival’s programming include: an All-Canadian Short Film selection; the Fabienne Colas Foundation’s award-winning Being Black in Canada series; and the VIBFF Black Market, where Film & TV industry professionals will share their thoughts and real-world experience on today’s most critical filmmaking issues.

The #VIBFF21 All Access Pass, which gives access to the entire programming, is available for only $39 (+taxes & fees) and can be purchased on the Festival’s website.

“The Canada Media Fund is committed to creating a more equitable and representative screen industry,” said Tamara Dawit, Strategic Lead, Equity and Inclusion, CMF. “This includes promoting the exceptional work of Black creators through gatherings like the Vancouver International Black Film Festival. We’re delighted to come in as co-presenters for the first edition of the festival, as we continue to create a positive environment for Black storytellers from all parts of the country.”

“Global BC is proud to support the Vancouver International Black Film Festival,” said Bhupinder Hundal, News Director and Station Manager, Global BC. “Now is the time where we amplify Black voices and see stories that have not received the attention they deserve.”

Fabienne Colas Foundation’s BEING BLACK IN CANADA
Presented by NETFLIX, in collaboration with the National Bank, and supported by Telefilm Canada, Canada Media Fund, the Canada Council for the Arts and various local partners.

Twenty Canadian short films from the 2020 cohort will be presented at #VIBFF21! The FCF’s BEING BLACK IN CANADA program supported 20 Black Canadian Filmmakers, 18 to 30 years old, in Montreal, Toronto and Halifax in the creation of 20 documentary short films (8 to 10 minutes). The filmmakers received professional coaching for each stage of the audiovisual production process then made a short documentary film under the tutelage of industry professionals. A unique project that ensures inspiring emerging artists from culturally diverse backgrounds.

The inaugural Vancouver International Black Film Festival, created by the Fabienne Colas Foundation and co-presented by Canada Media Fund and Global BC, runs from December 9 to 12, 2021.

About the Fabienne Colas Foundation
The Fabienne Colas Foundation is Canada’s largest Black cultural organization. Created in 2005, the FCF is a not-for-profit artistic organization dedicated to promoting diversity and inclusion in Cinema, Art and Culture in Canada and abroad. Along with Zaza production, the Fabienne Colas Foundation is also the creator of 12 Festivals, including the highly successful Montreal Black Film Festival, the hugely popular Toronto Black Film Festival, the Halifax Black Film Festival as well as the several other successful Festivals in Canada, the USA, Haiti and Brazil. These initiatives/festivals have showcased and supported over 5,000 artists and attracted over 2 million festivalgoers. The Foundation is also the creator of the FCF’s Being Black in Canada program, Canada’s largest incubator dedicated to Black Filmmakers.